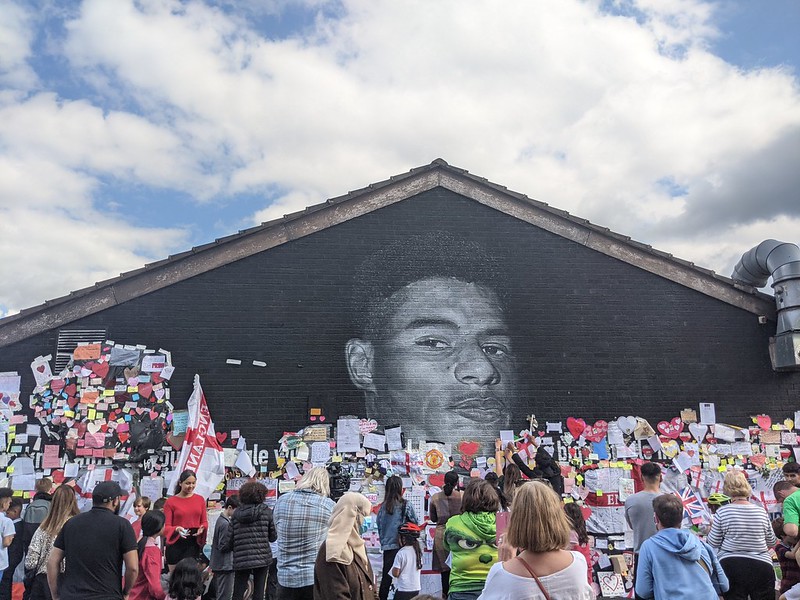 Most professional footballers of today will have dreamed of getting into the position they’re in at the moment in order to live out the lives that they’ve seen their heroes and achieve.

It’s often been the case that football clubs are central to the cultures of their community and contribute a lot to the general welfare and spirit of the local communities.

In the past, the press hasn’t hesitated in labelling most footballers as self-obsessed, egotistical, flamboyant and spoilt. The running theme here is that they were very much pretentious with their money.

A lazy narrative to run with undoubtedly with the aim of gathering crowds to their publications with quotes, some facts or images usually taken out of context. Which still happens to this present day.

Football is very much the sport of the working-class people. So, often the stories of modern-day footballers contain some legacy or heritage of everyday jobs, some even working multiple to try and combat any sort of struggle.

The rags-to-riches story will always be one of inspiration. The drive to make it to the top is in my opinion the foundation of the high-level of competition as well as we see in football week in week out.

As for some players they’ve got no other option to make something of themselves. It would be wrong to call it a trend but we are seeing some regular occurrence of social activism amongst footballers.

These are players who are looking to give back and make the world better for others who relate to their story. There are a whole range of issues that aren’t being tackled as efficiently by governments and elected organisations.

So, players will use their substantial following on social media to often bring awareness to and promote initiatives to tackle social problems. Most often their clubs show the strength of support but there are times where the club hierarchy and players are at odds.

Football has had its dimensions changed with the money put into it in recent years to make it more commercial and bolster the pocket of the super-rich. This new dimension of making football more socially active is actually more purposeful in helping the everyday person.

Yet, I do think there is a new dimension of social activism and we are seeing most clubs nowadays promote and market these social issues with the same detail there would be for marketing the new training wear.

The ‘’social’’ work can be a whole wide range issues from civil rights, gender and orientation to climate change, poverty, healthcare, bullying, religious discrimination and a whole lot more.

Of course, there are many examples of charitable works by football players across the world but I particularly took notice of the innovative initiative introduced by Manchester Utd’s Juan Mata.

The common goal project was introduced in 2017 with the aim of using football to impact some social change and change the lives of the many across the different continents.

The members donate 1% of their income towards the different projects to tackle different issues that we may and may not be aware of.

To this day there are 482 members and over 182 organisations in unison to bring about some positive social change.

Civil rights and religious discrimination have long been a problem domestically and across the world. Often the voices of the ‘’minority’’ aren’t enough to affect any sort of change in the attitudes that currently exist.

However, players who happen to be adored nationally and internationally have now become a voice for the voiceless.

The Black Lives Matter message, one the football world from broadcasters to players take on spread constantly is still being met with mixed reception.

With the common stand point for the opposers is its being a ‘’political’’ gesture. I can confidently say no political party has ever actively taken this message as part of their mission statements.

One of the most notable voices for this issue is England international and Manchester City forward Raheem Sterling has been one of the key names in voicing his experiences and the importance of the message.

He’s no stranger to facing prejudice and discrimination. With a significant portion coming from British press and still continues to this day.

Each Premier League club have been more than happy to make their contributions to the various initiatives and necessary uncomfortable conversation are taking place more regularly.

Whilst the message is still being met with apathy to this day, there is more awareness being spread on our television screens and radios that we are all equal regardless of the colour of our skin, religion we follow or any cultural differences we have.

Premier League clubs have all generally started to market the importance of equality with LGBTQ+ community, campaigns all over social media and at the grounds there is some symbol of support even on the kits of players of the armbands of the captains.

Leeds United striker Patrick Bamford has been actively trying to raise awareness regarding climate change. When he does put the ball in the back of the net he often makes a ‘’Z’’ symbol with his hands.

A gesture that represents a lightning bolt for the planet as he looks to reinforce the message of climate change and how there is a lot of work to be done and that starts with raising awareness for the issues surrounding climate change.

He is also an ambassador for an athletic trainer company, Hylo Atlhetics who aim to be sustainable by using seven natural materials in their trainers that are both recyclable and carbon negatve.

Another example is Eric Dier. If you watched the All or Nothing: Tottenham Hotspur series you would’ve have seen Dier mention how he grows his own vegetables.

His club also play a part in aiding the environment by growing their own produce at the training ground which is made available for players and staff to consume at canteen.

September 19 2021 will be forever remembered as the world’s first zero carbon game as London rivals Tottenham Hotspur and Chelsea go head to head whilst using the game to raise awareness of the threat of climate change and inspire a reduction in carbon footprint.

One of the most notable activists currently in the game however is Manchester United and England Marcus Rashford. Marcus and his team have not yielded in their efforts to make sure that kids across the nation aren’t disadvantaged at all.

The recent pandemic caused a lot of problems for many families as many people became unemployed. One of the main issues were the financial capabilities for low-income, working-class background families to afford food.

Rashford a name already a household name and a name recognised in World football, used his voice and influence to get some the biggest supermarket names on board, some fast food chains and actively shared the addresses of food banks located all over the country.

His work hasn’t stopped at all. Marcus has recently collaborated with respected journalist Carl Anka to produce a book titled: You are a Champion which inspires children to become successful through a persistent mindset.

Not only providing some education for the reader but also simultaneously raising awareness of the importance of reading books which for children may be less favourable given the digital age we live in and the technology available to them.

The different examples of activism we see from football clubs and players are very much needed. The parties and entities to campaign to be in charge of the nation often neglect these issues in an attempt to save some money for other political agendas.

It is satisfying to see more and more players take steps to impact some positive change our community and across the nation. All actions that are done with complete sincerity, with no virtue signalling or PR stunts in sight.

Football being the most popular sport means they’re followed on and off the pitch, which means they are provided with the perfect opportunity to raise some awareness regarding social issues.

Some publicly voice that players should ‘’stick to football’’ well to be honest a lot of us need their voices and they are doing the job that most governments are failing to do. Instead of criticising players for giving back how about some people do what they were elected to do.

This is the side of football that is evolving and is a reminder that this is a sport for the people and how the people are the foundations for the heights football has been able to reach.

Many players are undertaking projects either in public or not to make some part of the world a better place.

Whether its undertaking charity work themselves in their free time or being an ambassador for organisations, the sheer weight of a professional footballer’s name is sure to influence some social change.

Many professionals will have lived through what some of the hardships we are living at the moment and will ultimately be the driving force behind their work.

This social activism dimension that players and clubs have effortlessly adopted will no doubt solve some issues and create some conversations amongst politicians.

The commercial aspect of the game is influencing what we see in football and how often we see it. This social aspect influences many of our lives and gives some hope in that our heroes acknowledge that we matter and are pushing to change some of our lives for the better.