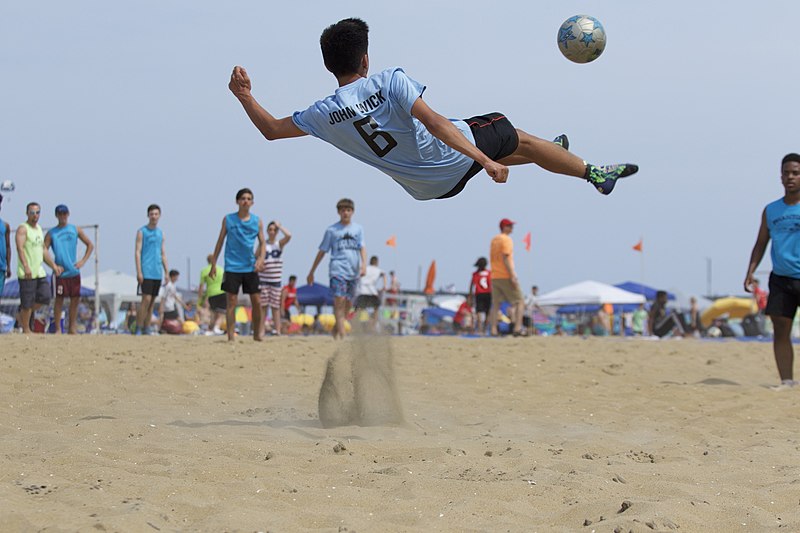 Beach Soccer, also known as beach football, sand football or beasal, is a type of football played on sand. While this much is painfully obvious from the sport’s name, other differences from ‘normal’ football are less commonly known.

Played on a smaller pitch with smaller goals, beach soccer features only five players on each team instead of eleven. The pitch is a little less than half the size of a standard football pitch, with beach football pitches having dimensions between 35-37m long and 26-28m wide, compared to the 90-120m length and 45-90m length of football pitches.

A game of beach football is also shorter, consisting of three periods lasting 12 minutes each. There are three-minute breaks between the first and second periods and the second and third periods. Another key difference here is that the clock is stopped when the ball is not in play. Other regulatory differences include the lack of footwear, the lack of the offside rule, and a ball inflated to lower pressure.

Freekicks don’t allow for walls and as long as the throw-in is taken within four seconds, it can be taken with feet in addition to being actually thrown in by the player’s hands.

With respect to gameplay and tactics, beach football is a much faster game. As a playing surface, sand does not facilitate dribbling, making the sport more aerial and reducing the number of passes. This translates into the increased need to think on one’s feet, so to speak.

The execution and set-up of goals happen quickly, and the average beach football match will see more goals than an average football match.

The hosts were fan favourites, and though they were expected to win, the finals were a battle between France and Portugal. The French, led by Eric Cantona, were the first winners of the tournament which was held annually until 2009, post which it has been held once every two years.

The ninth edition of the tournament was hosted by Russia this year, from the 19th to the 29th of August. The hosts, represented by the RFU, won the tournament for the third time, beating Japan 5-2 in the finals, highlights of which can be found here. Portugal, the defending champions, were knocked out in the group stages.

While there exist European tournaments for women, such as the Women’s Euro Beach Soccer Cup, there is no World Cup for women. It may be interesting to see whether the organisations pursuing the development of the sport take the unique opportunity to develop the sport for both men and women from a similar level at the same time or whether they choose to take the ‘conventional’ route of focussing only on men’s beach football.