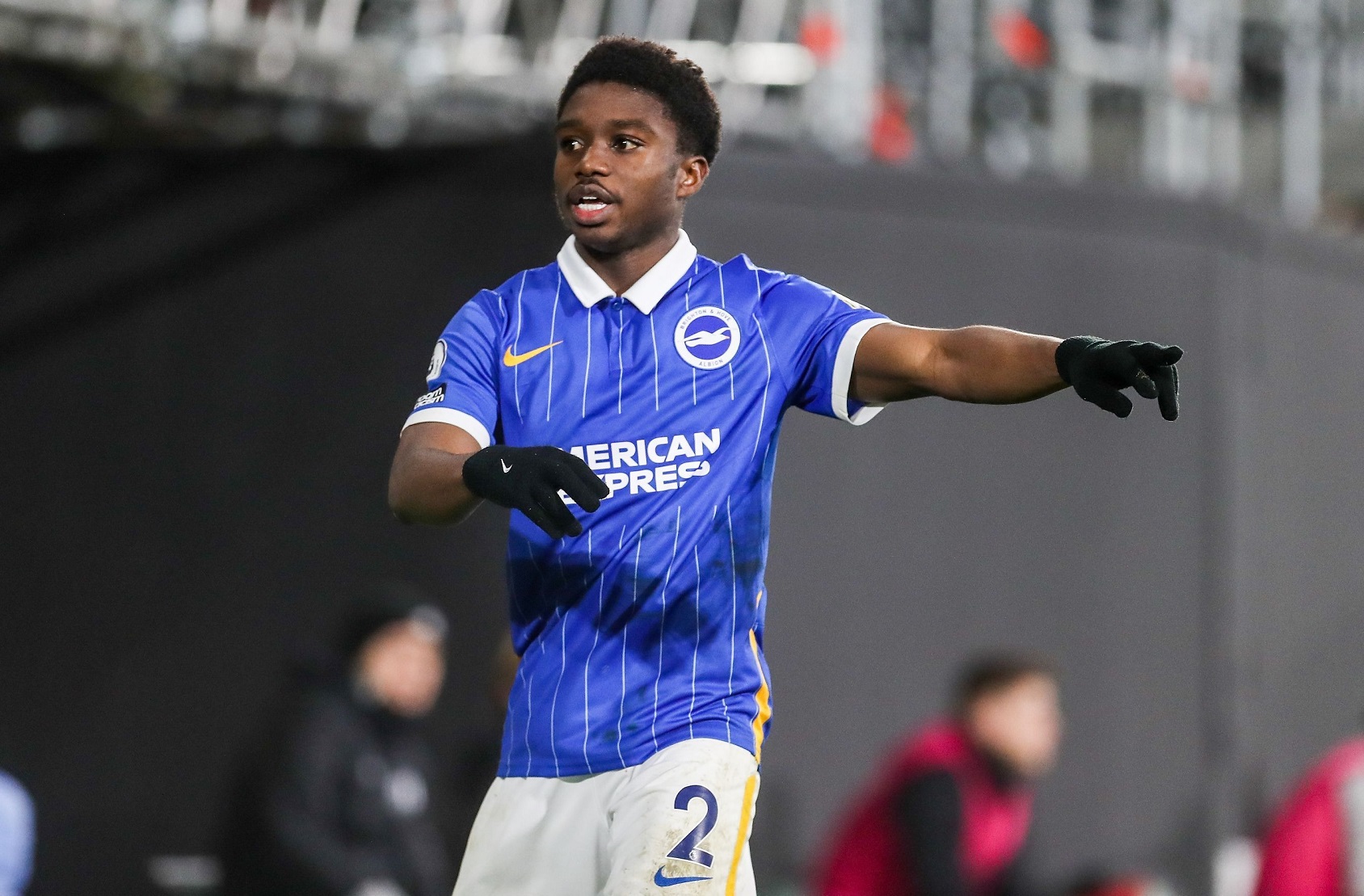 With the likes of Mason Mount, Jack Grealish, Harvey Barnes and Bukayo Saka making an impact in the Premier League and the English National Team, the state of English football probably hasn’t been this encouraging for years.

However, one player who has also been making an impact is Tariq Lamptey. Despite entering only his first proper full season after only 11 appearances in 2019/20, he has found his platform at Brighton and Hove Albion where at only 20 years of age, has made the right wing back spot his own. His performances have led to call-ups for the England U21 team, however it can be argued that his direct, aggressive and relentless style of play could more than compliment and potentially add a different dimension to Gareth Southgate’s team.

Signing for Brighton and Hove Albion, who under Graham Potter have been praised for developing young players such as Ben White, Steven Alzate, Solly March and Aaron Connolly, Tariq believed his chances at Chelsea were limited with only three appearances made so far in the season. However, his brief cameos caught the eye of Brighton. In the January transfer window, on deadline day, Lamptey took his chance and signed a three and a half year deal with the south coast team. Whilst still unproven, many believed Brighton may have produced a transfer coup, paying 3 million for the Hillingdon-born full-back.

Tariq was put into the side for his first start against Leicester City, helping the side earn a clean sheet. With Brighton never truly looking in danger of the drop, Lamptey found the perfect opportunity for regular game time, making eight appearances after the finalisation of the first lockdown.

Now entering his first full season for the club, Lamptey has again caught attention. He produced a fine assist in his side’s 3-1 home defeat against former club Chelsea and has scored his first senior goal against Tottenham Hotspur, remaining an ever-present throughout the first half of the season.

In this scout report, three primary attributes are looked at where Lamptey has stood out in within his limited number of appearances, accelerations, determination and intelligence.

If we look at Lamptey above, the trigger of a loose ball to the Villa full-back at the top of the picture initiates a sharp change of direction with a dip of the shoulder and subsequent acceleration to the loose ball, allowing Lamptey to beat his opponent to the ball, break the defensive line and exploit the highlighted area in a counter-attack.

Because of Lamptey’s awareness to intercept the ball and push into the open space, this translates to a very quick transition from defence to attack. For Brighton, this is a huge advantage. With Lamptey’s capability of producing quick transitions, this can leave their opponents out of shape, as we can see in the above with Villa’s two full-backs now completely out of the game and a 4v3 emerging just outside of the 18 yard area (sometimes known as zone 14).

His wide position as a wing-back allows penetrating lateral passes to be played through the now narrow Villa defence, as we can see in the picture above. This is the result of Lamptey’s quick acceleration to intercept the ball as we originally saw, creating situations such as this one and lead to multiple scoring chances.

Saying that, Brighton have been known to be one of the best teams in the Premier league at creating chances. Lamptey is a fine example of this. In Brighton’s recent 0-0 draw against Burnley, Lamptey created three chances for Brighton which from a wing-back position shows that he is certainly fulfilling his task of using his blistering pace to cause problems for opposing full backs and centre backs.

Whilst the scenario above certainly demonstrates a strong physical dimension to Lamptey’s game, it’s also down to a strong mindset.

The previous scenario shows that Lamptey has the capability of exploiting spaces behind defensive lines.

But this comes down to determination as well. In other words, Lamptey must want the ball and work hard to get it before his opponent before subsequently retaining it.

This is an important defensive trait to have in order to execute certain defensive principles such as tackling and pressing. Whilst Lamptey certainly has been presented as a very attack minded full-back, he wouldn’t be at the level he is at without determination in defence.

If we look at the following example from a defensive perspective. Lamptey’s position initially forces his opponent to play either up or down the line, having cut off the opportunity for his opponent to cut inside laterally towards the 18 yard box.

Following a one-two combination, Andorra managed to find an opportunity to get to the by-line where Lamptey initially committed a direct press, which allowed the combination to take place. Nonetheless, his acceleration allowed him to make a suitable and direct recovery run alongside the Andorra player.

Lamptey’s determination to recover from a small error allowed him to turn Andorra’s attacking opportunity to England’s advantage. His composure also allowed him to play to the England centre back where England subsequently re-set their defensive shape and play the ball out of defence with three of Andorra’s players now out of position on their left side.

Lamptey has also shown good determination as a defensive cover. His acceleration makes him a perfect match against strikers on the counter attack.

If we look at the 1v1 situation, Newcastle managed to break Brighton’s poor defensive line with Lamptey the furthest player back. His aggressiveness to beat his opponent to the loose ball allowed the defensive recovery and prevent a certain Newcastle goal.

What is also significant is the amount of space he has to make up having arguably started his defensive recovery run in the central third of the pitch and that he has run actually had to be curved as oppose to being direct which requires extra effort compared to the Newcastle striker, whose run was direct.

Lamptey’s acceleration matched with his determination allowed him to catch up and provide a vital challenge which subsequently went out for a throw-in. But if we look at the angle Lamptey had made his run clearly shows his extreme burst of movement in what became a race to get the ball. Lamptey’s execution of the tackle was perfect, getting the ball first instead of his man which with incorrect technique would likely have earned him a dismissal.

If we also look at the space in front of the Newcastle striker, this is a massive motivation for them. In other words, a striker who sees that amount of space will always show an extra burst of pace themselves, as their determination to get the ball into that space is also very high, which subsequently increases their acceleration and velocity.

This shows that Lamptey is extremely efficient at tracking back and once again using his composure after a long run to execute a last minute challenge in a dangerous place for him. It is argued that it could have been easier for him to use his pace to act as a cover between the striker and the goal. Instead he went for a direct and extreme approach to win the ball back with a challenge.

Whilst we have covered Lamptey’s ability to recognise opportunities to initiate counter attacks and catch opponents out of position within that transition, Lamptey has also shown to be capable of initiating counter attacks from his own half and be that outlet and target to create chances.

As we can see below, Lamptey has won a header following an opposition free-kick. Immediately after winning the header, the ball finding it’s way to the highlighted Brighton player, Lamptey has already identified his next action, which is to exploit the space off the ball behind the Burnley player looking to press the Brighton player who has received Lamptey’s header.

Whilst there is no guarantee that Brighton may be able to get the ball to him, Brighton do have six players against Burnley’s two in the 18 yard box, meaning Lamptey must know that should Brighton retain possession (which is likely) then he is able to be that target to break Burnley’s midfield line.

This ultimately comes down to quick thinking on Lamptey’s part. He knows exactly what he wants to do the second after he won the original header.

Now as we can see in the bottom picture, Burnley have now been stretched and Lamptey’s earlier thinking has now provided Brighton with an option out wide on the counter attack and allows him to receive the ball to create a 1v1 situation, a situation which Brighton will favour as Lamptey has shown he is very adept at beating players.

Whilst the chance came to nothing, Lamptey was able to beat his man 1v1 and get a cross in, however a poor pass by the highlighted Brighton player allowed Burnley to come back and provide defensive cover whilst Lamptey was performing this action.

Nevertheless, this shows Lamptey’s ability to recognise opportunities from his own defensive third and using the space between the opponent’s lines to his advantage. This makes Brighton incredibly dangerous on the counter attack.

So to conclude, Tariq Lamptey has shown some strong attacking and defensive traits and good defensive and attacking movement within transitions. Despite being a relatively short player, what he lacks in height he certainly makes up for with his dangerously direct and forward thinking style of play, an area that may be highly advantageous for the England national team in the future. At 20 years of age, he has a big future ahead of him and he can be considered to be in very safe hands under Graham Potter, who has developed a reputation for growing and nurturing young talent.

Whilst Lamptey may have to work on certain attributes such as his press, his accelerations make him a brilliant player to recover from his mistakes as we have already seen from a defensive point of view.

As an attacking wing-back, his ability to read situations, recognise space and to think of his next action when committing forward has helped his teams create high levels of chances. Within the event of a counter-attack, this can be a huge outlet for any team, especially when the opposition are transitioning from attack to defence and taking advantage of open spaces.

Lamptey’s mindset has also helped him produce some brilliant tackles across all thirds of the pitch and it can be argued that he has saved as many goalscoring opportunities as he has produced them at the other end. While he may not be physically imposing, his aggression makes him a hard player to shrug off, not giving players a moments rest so long as he is near them.

With Bayern Munich believed to be interested in the young full-back, Lamptey certainly has the capability to reach the highest level possible and potentially, England’s next first choice right back within the decade.

It wouldn’t be surprising for big clubs to be making a bid for the starlet next season and maybe even this season. However, Lamptey is in good hands, playing regular football after being given his chance at the senior level and has he delivered? Most certainly, don’t be surprised when he earns his first England cap at the senior level